Wonderful mix from slip discs founder Laurie Tompkins is now online as the November nonclassical podcast. You can hear a sneak preview of a couple of tracks from the forthcoming GOVES ep available on 3 December.

Check it out here.

I’ve just had a flyer through for the London Sinfonietta’s New Music Show 3 which is taking place in the Queen Elizabeth Hall, Purcell Room and other spaces around the South Bank Centre on 2 December. I’m looking forward to hearing the second performance of my piece Trends in personal relationships which I’m revising a little after the premiere from the London Sinfonietta Academy earlier this year.

I really like the programming for this concert which includes music by composers I already know and admire and music I’ve been meaning to get acquainted with for ages. There’s also a sequence of intimate solo performances in privileged backstage spaces; I know what a couple of these are going to be and I they should be special. Then Serafina Steer and Olly Coates rounding things off with a late night Purcell Room set which is going to include Yawl Ketch Schooner Brig a gorgeous piece by Charlie Usher which I really think deserves a London outing.

Hopefully I’ll see you there.

Tuesday was a day trip to London to hear my new EP being mixed by the wonderful Noel Summerville of 3345 Mastering. The EP is being released on 2 December by Slip Discs under the name GOVES.

Noel works with an analogue 1970s numan mixing desk and uses almost no digital processes at all. It made the music warmer and gave a mainly digitally constructed sequence of new tracks a layer of analogue polish.

As this is also being released on vinyl I also witnessed lacquers being cut for the first time. They look wonderful. I’ve a feeling that this tactile medium for music is going to prove serious addictive.

Some images from the studio: 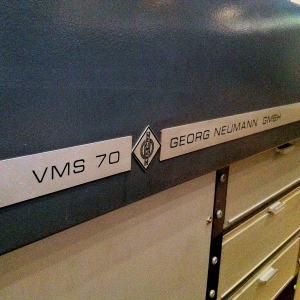 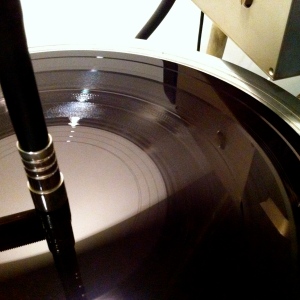 Flights of sound was great fun and was an intimate close to the Tatton Biennial. It was a pleasure to have such committed performances from Tom McKinney and Jane Chapman and I was particularly please to hear A Fire-Island Sky at its extremely delayed premiere played twice in two beautiful Tatton Rooms. I don’t have any images of that but I do have some others including Aura’s spectacular graphic score which provided the backbone to Jane’s improvisation. It was lowered and raised by means of a bespoke cast iron hand-wound contraption and was an affecting contrast with Tatton’s splendour, faded or otherwise. 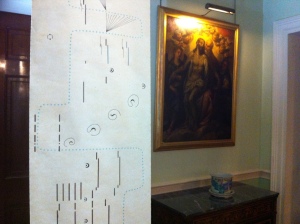 This Saturday I have two new piece being premiered. This is part of the culmination of the Tatton Park biennial which is a summer long art show. You can see previous posts for information on Aura Satz’s new piece which I made a new sound track for.

The two pieces this Saturday are both premieres but on is old and one is new. The old piece is a kind of satellite from mine and Matthew Welton’s opera. The piece is for solo guitar and uses material from a significant scene towards the end of the opera. It takes its name from a line that Frank O’Hara sings while A Fire-Island sky. I wrote this piece for Tom McKinney to play in a concert we did together at the Spitalfields Festival last year but, partly because we were very late setting up because as there was no electricity were we were playing (and partly because my bag was stolen the night before with a load of my gear) we savagely cut the programme including this short piece. Actually this piece will suit the reverberation of the Tatton state rooms better and Tom is playing this alongside Elliott Carter’s Shard, Laurence Crane’s Three pieces for guitar and some music from the Tatton Library collection.

I feel very lucky that my other new piece other piece is being played by harpsichord legend Jane Chapman. This is a new set of pieces called Uninhabited islands which includes the harpsichord material from the installation film. This has been elaborated on so it now forms a set of eight miniatures (the set is no more than 7 minutes long). I enjoyed finding the movement titles which are all very remote islands around the world. I chose them because I imagine them as fantastical places and because the names seemed so delicious (the miniatures are called Erwing, Disappointment, Comprida, Pouncet, Rose, Schmidt, Zhokhov and Langenwerder). It’s great that Jane is premiering them here as it will be on the Tatton instrument that I was thinking about when I wrote the set and the installation will also be running for part of the evening so hopefully these two pieces will provide some context for each other. Jane is also playing music from the Tatton archive but, most excitingly, she has made a new piece with Aura. I cant wait to see and hear what they’ve come up with.

The other highlight for me will be Leo Grant’s new piece played by the Pleyel ensemble. We were contemporaries at Southampton University and I’ve not heard his music for too long. I can’t wait to hear this new piece and see how much his music has changed over the last few years.

With contemporary music alongside music from the Tatton collection and in the splender of this stately home I think this will be a surprising and memorable concert.

If you want some more information you will find it here.

Going to be performing for slip discs later this month alongside Points of Light and others all supporting Mark Fell. This should be a great night out. I’m putting together a new set which I’m hoping to be entirely different from my concert music and the house of bedlam. Planning for this to be a very flexible lineup but on the 27 June I’ll be joined by Oliver Coates and Harry Percy. Expect some originals and new music incorporating snippets of David Bowie, Cat Stevens, Frédéric Chopin and others. You can buy tickets here. You can see Mark Fell play live for £5. Why wouldn’t you? 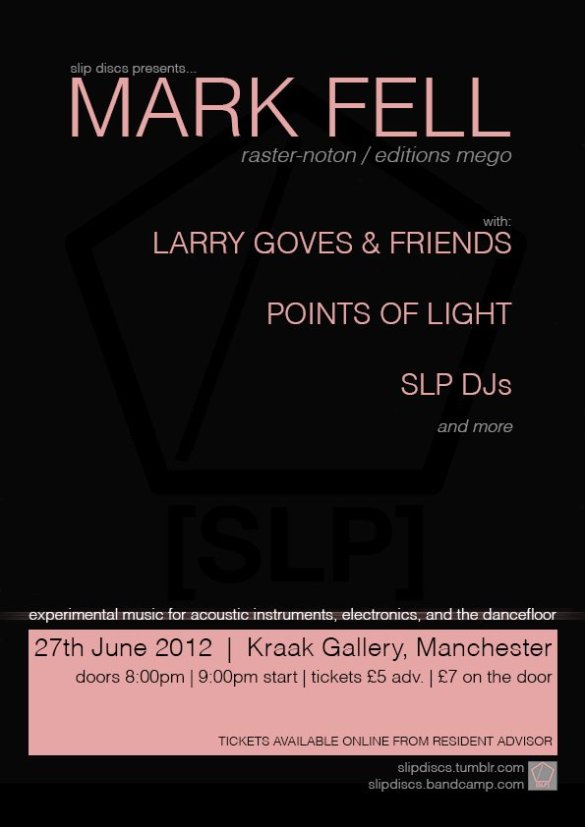 The premiere is on Thursday 12 July at the Platform Theatre conducted by Elgar Howarth alongside well known repertoire pieces including music by Elliott Carter, Oliver Knussen, Mark Anthony-Turnage and Colin Matthews. The concert is also free! Do come along – I think it will be great fun. There is some more information here:

Scores are now available for purchase from Composers Edition here. If you'd like a piece that's not available there then please contact: larry@larrygoves.com
Forthcoming: