So I’m really excited that the house of bedlam will be playing together for the first time in years next week as part of the New Music North West Festival at the RNCM.

This has been an interesting pair of concerts to programme. I originally formed the house of bedlam back in 2007 to play mainly my music. I wanted to incorporate electronic sound into my music after an amazingly positive experience at Aldeburgh’s New Music New Media course. I wanted to be less precious about my music and use the group to explore new sounds, new ways of thinking about composition and the relationship between composer and performer.

In fact the whole experience was completely invigorating and a music making that I thought would be confined to the ensemble has found its way into my composition and music across the board. Although we have not done a straightforward concert for a very long time over the years the ensemble formed the backbone of the instrumentalists for mine and Matthew Welton’s opera workshops at Aldeburgh Music, we did a project together with David Sheppard where the two of us made instruments for the ensemble to play and I have made various pieces with members of the ensemble including songs with text of Matt’s for EXAUDI and Trio Atem, a guitar concerto interspersing sections of Britten’s Nocturnal with new music for guitar and string orchestra and new pieces for Olly Coates for cello and electronic sound including Filakr on the Slip Discs release A creche for the lonely and peculiar and the clouds flew round with the clouds on Towards the blessed islands released on PRAH next month.

These concerts are also a week away from the nonclassical bedlam release which, as mentioned in an earlier post, is music from the first two years of the ensemble.

All of these things have affected the programming for the next two concerts. I have tried to take some of the original ideas that inspired the house of bedlam and finding a way to incorporate them into the New Music North West Festival

So the first concert is almost all solo pieces. There is solo music from Fabrice Fitch, Matthew Sergeant and Bethan Morgan-Williams. These are all friends and collaborators. Matt, as well as being a colleague at the RNCM, has written for the ensemble before. Fabrice is a composer and academic colleague at the RNCM and we have talked a great deal about music, composition and research. Bethan is a student at the RNCM and she has been kind enough to play the violin with me in some duo shows around Manchester. These are tied together by three other pieces. There is Alvin Lucier’s monolithic masterwork Music for cello and one or more amplified vases and Elizabeth Bishop’s poem, performed by Matt, from which the ensemble takes its name. I am making a new piece of simple fragmented and unison melodies inspired by Matt’s poem I must say at first this was difficult work. I am interested to hear the solo pieces positioned in the performance space, a solo work that uses objects placed about the same space to make music and a simple spatialised chamber work together.

One other element to the house of bedlam was to try and integrate myself as a performer. Although I do perform live electronics I have never considered the physical and showy side of this performance practice key to my own work. I was simply interested in being part of the group rather than outside of it and complicit in the rehearsal process as a collaborator and performer rather than as the director or composer. It has affected how I think about my composition and my relationship with the performers I work with. The three new pieces in the late night concert, therefore, all include the composers as performers. David Horne, an extraordinary pianist as well as composer, has made a new work for piano, saxophone and guitar which also uses a keyboard to trigger sounds in a playful response to a piece of mine, My name is Peter Stillman. That is not my real name. which uses a full size electric keyboard as well as acoustic piano. This is a piece that David has played and we have discussed at length. Ian Vine, who like Matthew Sergeant is one of my closest composition friends and has written for the group before, has made a new work where he joins the ensemble as one of two electric guitars. Recently Ian has been making 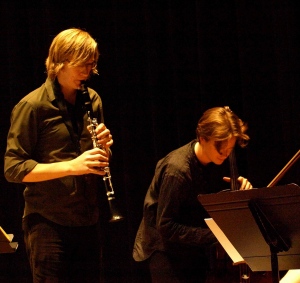 a number of pieces for himself to play which I think has distilled music of his thinking about composition over the last few years and has produced ravishing music of immense fragility and stillness. Finally Tom Rose, a current RNCM student, has made a new piece for the ensemble and we will be performing the two laptop parts together. Given that I have been teaching Tom for over a year before he arrived at the RNCM and since and we have also collaborated on the Slip Discs label it’s a real treat to be able to share the electronic component of this new work. The rest of the pieces in the concert are mine and Matthew Welton’s. These are some of the original pieces written for the ensemble an it is a particular pleasure to revisit these ahead of the nonclassical album.

So this is the house of bedlam back in business. Next year new pieces, new collaborations and new projects. Below are the programmes for the concerts. I hope to see you there.

View all posts by Larry Goves

Scores are now available for purchase from Composers Edition here. If you'd like a piece that's not available there then please contact: larry@larrygoves.com
Forthcoming: